A MOVIE BY PHILIPPE VINCENT 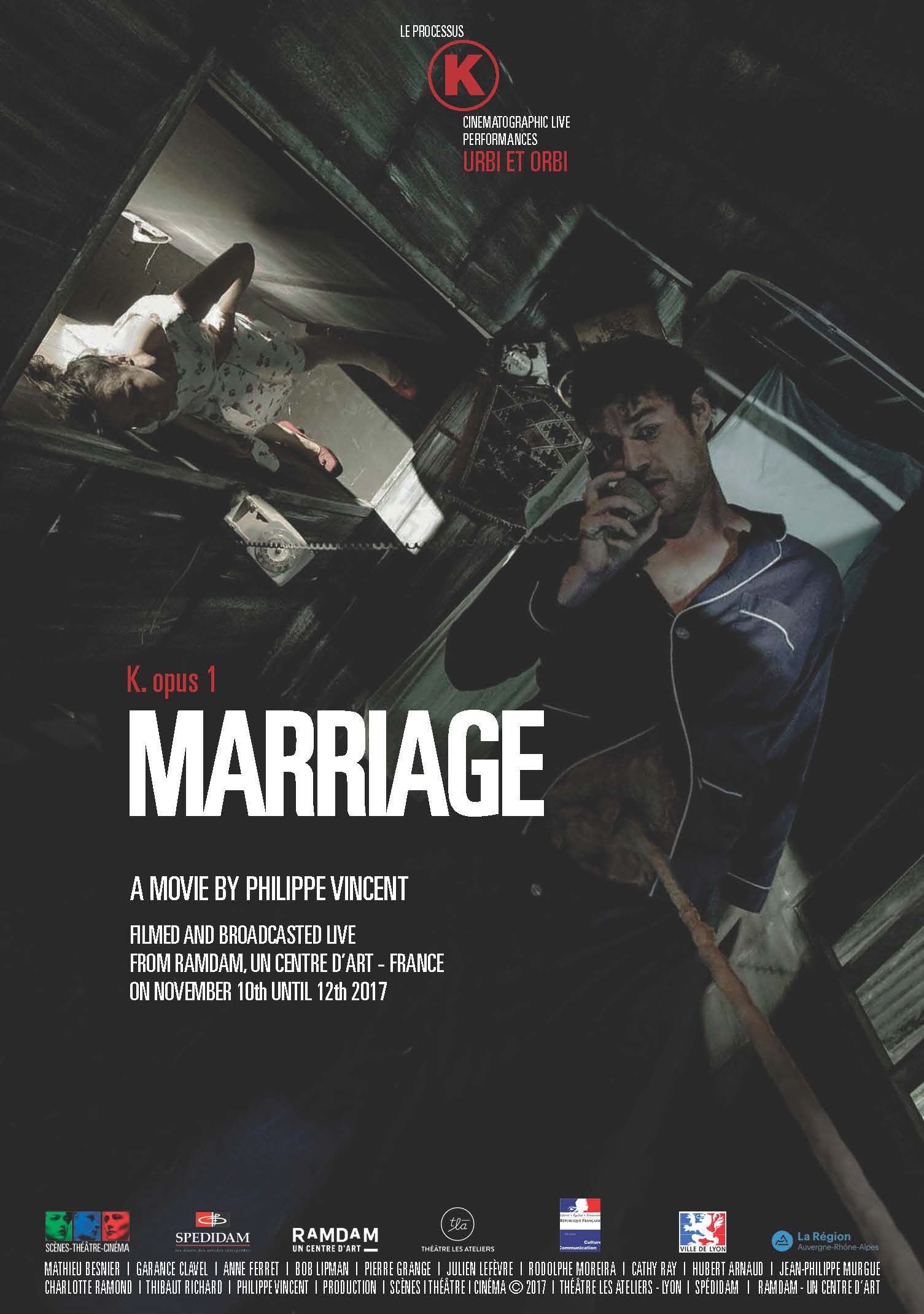 This is a movie, shot and edited, in real time,  by Philippe Vincent, artistic director and filmmaker. The « live movie » will be filmed and broadcasted live from Ramdam, an art center, in Rhône-Alpes, in France, to various locations, cinemas and theaters around the world, as the University at Buffalo in USA, the Arthouse Cinema Niagara in Finland, the GIFT Festival of Tbilissi in Georgia. This performance will play in Ramdam in front of the audience in November 10th, 11th and 12th.

While his future mother-in-law Felice and his future wife Milena are busy preparing the wedding feast, Joseph is asleep in his room upstairs. Joseph is dreaming that an umbilical cord is pulling him from his bed and towards the ceiling. The telephone starts ringing. After a moment of doubt throughout the household, it is clear the sound is coming from the one in Joseph’s room. Milena grows impatient, then decides to go upstairs to pick it up. Joseph, still hanging from the ceiling by his cord, could not do it. Milena hands him the receiver and listens to the conversation: Joseph’s father, whose existence he was unaware of until this morning, tells him that he will be present at his wedding. Joseph is surprised, yet pleased by this news. A bearded man, whom Joseph often sees in his nightmares, breaks through the ceiling of the room and hands Joseph a knife. Joseph can finally cut the cord. But what follows is a dizzying fall and Joseph drops to the ground, lifeless. Milena and Felice take turns trying to revive him, Milena providing him with a cardiac massage, Felice tearing his heart out, then straddling him as if to rape him. Joseph finally wakes up and strangles his future mother-in-law.

Through a quick flashback showing various fleeting moments, we understand that Joseph has only arrived at this house a few weeks ago. He is looking for work, and can not afford his rent beyond the first payment. Milena, who caught him one night in the kitchen stealing food, helps him pay his weekly rent by drawing from the money previously put into his mother’s piggy bank. Milena seems less intrigued by this new tenant than quietly enamored with him. Of course, Felice finds out what’s going on, thinks Joseph himself is the thief, and issues an ultimatum: If Joseph marries Milena (whose nine marriages have all been aborted) he will not have to pay the rent.

A multitude of surrealist sketches follows and leads us to the marriage day.

An art performance which allows us to bind Welles’ films with Kafka’s literature. Between dream and reality, the writing of the script serves to highlight Joseph’s nebulous, paradoxical dilemma, while the concept of « live cinema » reveals to the audience the technical tricks of the staging as if to offer them the key of subconscious mind.

Since the creation of the Compagnie Scènes at Saint-Etienne in 1988, Philippe Vincent works to invent a radically contemporary dramaturgic form where the narrative and aesthetic principles come to the aid of the language of theater. At the head of what can be seen as a collective of artists, he explores a path which seeks to immerse the audience in the interior of the theatrical production itself. His stagings are composed of strong images that collide with one another, an exploration of the rapport voice/music, most often with musicians on stage, and actors on the thin line between disembodiment and emotion. Trained at the school of the Comédie de Saint- Étienne, he based his company for a time in Venissieux Theater at the occasion of a Müller project in 1999.

Scènes was subsequently located at the Subsistances in Lyon. Intimately familiar with the writing of Heiner Müller, Philippe Vincent has staged nine of his plays. He created Anatomy Titus Fall of Rome at the Festival d’Avignon (2001), then at the Théâtre de La Croix Rousse. He has also tackled the universe of Shakespeare with Waiting for Richard (2000), Hamlet (1996) and Timon of Athens (1991). In 2006, he staged Fatzer by Brecht which was at the heart of the dramaturgical questions concerning Müller. There, he carried out an extraordinary theatrical experiment, continuing the search for a different rapport with the audience such as that initiated by it’s author in the didactic pieces. The staging was based on the four cornerstones of the Scènes universe: theater, cinema, music and the voluntary upheaval of bearings as much on stage as in the audience. Philippe Vincent staged several plays by Thomas Martin, actually dramaturge at the Volksbühne, including My country in pieces (2002), and Patriotism (2005).

He regularly works abroad where he has imagined unique projects such as Waiting for Godard (2009), a theatrical cabaret with actors/singers from the Volksbühne and Bull’s Eye: a history of details, with 5 multidisciplinary artists coming from Germany, Norway, Finland, and Portugal (in Portugal, then in Marseille, the 2013 Capital of Culture). For 5 years, he has collaborated with the Franco-Libyan author Riad Gahmi co-creating An Arab in my mirror in Cairo (presented in New York in 2011) and Where and when we died (2013), and together they created Gonzo – a love drama in the world of X – coproduction TNP-Villeurbanne and the Comédie de St-Etienne (2017). Philippe Vincent also created with a collaborative work with the Collectif Béneeré, a collective of artists from Burkina Faso in april 2015 : Total Indépendance at the CITO in Ouagadougou.

And he served from January to March 2016 the Permanent Theatre of Gwenael Morin, presenting four shows including the creation of Hamlet-Machine with David Mambouch, Alwynne Pritchard and Thorolf Thuestad’s collaboration (Neither Nor Company- Norway), at Le Théâtre du Point du Jour in Lyon.

SCENES THEATRE CINEMA is funded by the Minister of Culture (DRAC) and the Auvergne-RhôneAlpes region, and the city of Lyon. IETM member.